Fannie Coralie Perkins knew by the age of ten that she would never be a conventional beauty, that unlike many women of her day she could not rely on physical attractiveness to open doors to her future. Her mother, Susan Bean Perkins, delivered the message when she took her daughter shopping for a hat. It was 1890, and the day’s fashionable hats were slim and narrow, festooned with colorful ribbons and topped with flowers and feathers that added inches to a woman’s height.

Susan Perkins passed by the pretty hats and pointed instead to a simple three-cornered tricorn style, similar to the ones worn by Revolutionary War soldiers.

“There, my dear, that is your hat,” she told the girl in a matter-of-fact way. “You should always wear a hat something like this. You have a very broad face. It’s broader between the two cheekbones than it is up at the top. Your head is narrower above the temples than it is at the cheek bones. Also, it lops off very suddenly into your chin. The result is you always need to have as much width in your hat as you have width in your cheek bones. Never let yourself get a hat that is narrower than your cheekbones, because it makes you look ridiculous.”

–from The Woman Behind The New Deal, by Kirstin Downey

It’s difficult to find a picture of Frances Perkins where she’s not wearing a hat.

She wore them everywhere: while working in the office, during Cabinet meetings, while visiting work sites. The wearing of hats, of course, was the fashion for women during her lifetime.

But Perkins also may have had another object in mind. As Maureen Corrigan notes in her review of Kirstin Downey’s biography of Perkins: “She never wore makeup and favored tricornered hats and no-nonsense black and navy suits. Early in her professional life, Perkins had begun taking notes on male colleagues; she filed them in a large red envelope labeled, ‘Notes on the Male Mind.’ One thing she had discerned was that women in politics were accepted if they reminded men of their mothers; hence the matronly wardrobe.” 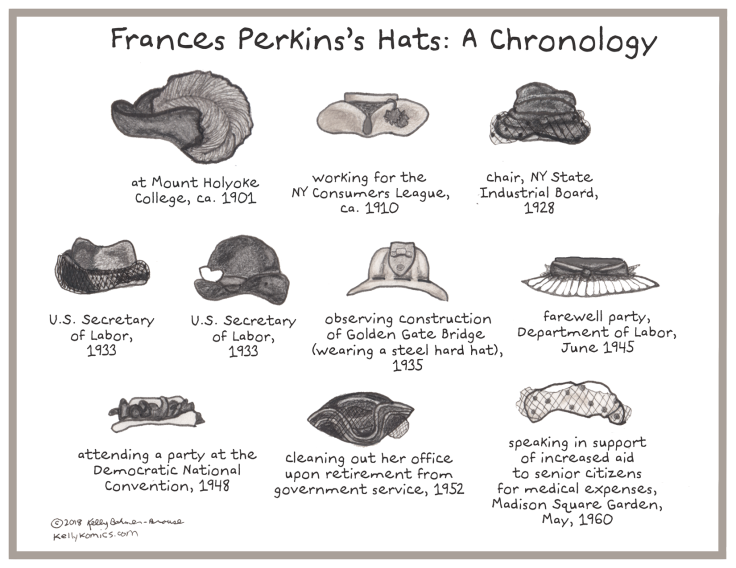 Frances Perkins had realized early that her hopes & visions for America could best be achieved through political means. She had been raised in a middle-class, firmly conservative Massachusetts family. But in her senior year at Mount Holyoke College, the science major took a course in American Economic History with Professor Annah May Soule. Soule had her students visit the paper and textile mills in nearby Holyoke, Massachusetts to observe working conditions firsthand.

Perkins was appalled by what she saw — no limit on working hours, child labor, no provisions for workers injured while on the job, a lack of safety guidelines. Shortly thereafter, when Florence Kelley, president of the National Consumers League, came to the Mount Holyoke campus to speak on these very issues, Frances Perkins realized she had found her life’s work, as well as a mentor.

After graduating from Mount Holyoke, unable to find employment in social work, Perkins took a position teaching in suburban Chicago. However, she volunteered her off-hours and vacation time at Hull House, the renowned settlement house, where she spent time working with recent immigrants, and the poor.

From Chicago, she eventually made her way to New York City, where she began working with Florence Kelley at the National Consumers League. As Executive Secretary of the NCL, Perkins spent much time in Albany lobbying for worker’s rights.

But she was in New York City on March 25, 1911, having tea at a friend’s home near Washington Square.  A pleasant afternoon tea was interrupted by the sound of fire engines — and screams.  Perkins dashed across Washington Square Park to discover the source of the commotion, and found the Triangle Shirtwaist Factory in flames. She saw desperate workers standing on window ledges, trying to escape the fire. She saw workers jump, and fall. She saw workers die.

The experience galvanized her. Appointed as chief investigator for the Committee on the Safety of the City of New York — a group which rose from public outrage over the Triangle Fire — Perkins visited factories all over the state, and in modern parlance, Got Stuff Done:

… this was an extraordinary opportunity, you see, to get into factories to make a report and be sure it was going to be heard.

Because you made the report publicly to the governor or to the commission … Although their commission was to devise ways and means to prevent accidents by fire in the State of New York, we went on and kept expanding the function of the commission ’till it came to be the report on sanitary conditions and to provide for their removal and to report all kinds of unsafe conditions and then to report all kinds of human conditions that were unfavorable to the employees, including long hours, including low wages, including the labor of children, including the overwork of women, including homework put out by the factories to be taken home by the women. It included almost everything you could think of that had been in agitation for years. We were authorized to investigate and report and recommend action on all these subjects. I may say we did.

From here, she zoomed up the professional ladder, gaining more & more notice for her work. In 1929, New York Governor Franklin D. Roosevelt appointed Frances Perkins the New York State Industrial Commissioner; in 1933, when FDR became president, he named her Secretary of Labor.

She was the first woman in American history to serve as a Cabinet Secretary, and is in large part responsible for implementing the modern economic social safety net: unemployment insurance, worker’s compensation, Social Security, the minimum wage. She also crusaded for basic labor rights — the 40-hour work week, standards for overtime, and abolition of child labor. (One contemporary magazine pointed out that the programs of FDR’s administration were “not so much the Roosevelt New Deal, as … the Perkins New Deal.”)

But as she helped change America, she faced unimaginable personal difficulties.  Her husband, Paul C. Wilson, had what would now likely be diagnosed as bipolar disorder, and was institutionalized for most of their marriage, until his death. (As she was leaving for the bill-signing ceremony for the Social Security Act, she received word that her husband had slipped out of his New York City hospital, and was missing. Perkins attended the bill-signing ceremony, posing for news photographers alongside President Roosevelt and the rest of the Cabinet. But the ceremony was over, Perkins hurried to take a train to New York, and started searching for Wilson: “…several hours later, she finally located her confused and disoriented husband wandering the streets of the city.”)    Perkins was the sole provider for her family, paying Wilson’s substantial sanitarium fees, and raising their daughter by herself.

However, she remained undaunted in the face of personal challenges, and maintained her commitment to her causes.  At age 77, after retiring from government service, she became a lecturer at Cornell University’s New York State School of Industrial and Labor Relations, a position she held until her death at age 85.

At age 80, she spoke in front of tens of thousands of people at Madison Square Garden, in support of a forerunner to the Medicare program. (Universal health care for all Americans was her goal, and one of her few dreams which did not come to fruition.)

Mount Holyoke College, Frances Perkins’ alma mater, named its program for students of non-traditional age in her honor; the Department of Labor building in Washington, DC is named after her.

A portrait of Frances Perkins hangs in the Department of Labor’s Hall of Secretaries. The reproduction on the DOL’s web site is small & dark, and details are difficult to make out — but she doesn’t seem to be wearing a hat.

If she isn’t, that would be apt.

Frances Perkins no longer needs a hat to be accepted as a force in politics.

*Perkins changed her given name in 1905, after her confirmation in the Episcopal Church.

Downey, Kirstin. The Woman Behind the New Deal: The Life of Frances Perkins, FDR’s Secretary of Labor and His Moral Conscience. New York: Nan A. Talese/Doubleday, 2009.

Frances Perkins Center. “Her Life: The Woman Behind the New Deal.” Accessed March 8, 2018

Drawings of hats based on pictures of Frances Perkins found on the website of Getty Images, Google Images, and several of the sources listed above.

One thought on “Nevertheless, She Persisted: Frances Perkins”