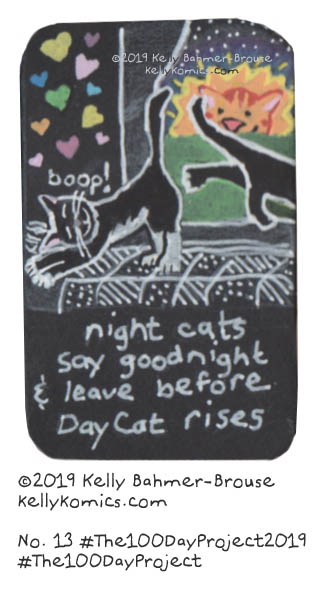 In yesterday’s post, I mentioned that the Chief Night Cat — appearing as the merest sliver of a waxing moon– was inspired by my own late cat Henry.

Henry appears again today, as DayCat.  Because Henry was orange, like the morning sun, and because, as in the line from the “For I will consider my Cat Jeoffry” portion of Christopher Smart’s longer work Jubilate Agno:  “For in his morning orisons he loves the sun and the sun loves him.”  (He did, and it did.)

It might seem contradictory that Henry could serve as both the sun and the moon, but after all, moonlight is only reflected sunlight.

The Night Cats, of course, are better represented by these lines from Smart’s poem: